Firefox wants to go (obviously) cheast to cheast with IE. Ok, first thing you’ll notice is ugly IE look alike theme. Which is official default Firefox theme, and which is ugly. Most users will comments its look, or just stay or stick on it, before even thinking about what’s under the hood.

Why, again I have no idea.

Something I hate the most is unstable software. Firefox is a new definition to it. 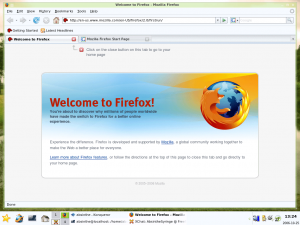 I’m on Mandriva 2007.0, official .rpm wasn’t out yet, so I downloaded the official tarball from getfirefox.com. Ok, really thanks for that awesome what does close button means hint, great!

Ok I went on with it, since I read most of the things what should Firefox2 be about, best and only thing I really like about it is, spell check. So ok I log in, into gmail to check and take the screenshot of FF2 doing it, and crash. 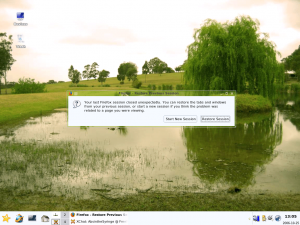 Since I’m pretty hooked on Firefox right now, I’ll stay on it. I removed Firefox2, went back on 1.5.0.7.
I dont know what I’ll do once there’s a Mandriva .rpm for it.

I moved from Opera cuz it was just way going to be a Firefox, now I cant stand Firefox cuz it’s too much of an IE.

Prolly Konqueror is next, perefect browser, but way way slow, but who knows …