In this blog post, I’ve described what started as simple migration of WordPress blog to AWS, ended up as automation project consisting of publishing multiple Ansible roles deploying and running multiple Docker images.

If you’re not interested in reading about my entire journey, cognition gains and how this process came to be, please skim down to “Birth of: containerized-wordpress-project (TL;DR)” section.

Since I’ve been sold on Amazon’s AWS idea of cloud computing “services” for couple of years now. I’ve wanted, and been trying to migrate this (WordPress) blog to AWS, but somehow it never worked out.

Moving it to EC2 instance, with its own ELB volumes, AMI, EIP, Security Group … it just seemed as an overkill.

When AWS Lightsail was first released, it seemed that was an answer to all my problems.

But it wasn’t, disregarding its bit restrictive/dumbed down versions of original features. Living in Amsterdam, my main problem with it was that it was only available in a single US region.

Regardless, I thought it had everything I needed for WordPress site, and as a new service, it had great potential.

Its regional limitations were also good in a sense that they made me realize one important thing. And that’s once I migrate my blog to AWS, I want to be able to seamlessly move/migrate it across different EC2’s and different regions once they were available.

If done properly, it meant I could even have it moved across different clouds (I’m talking to you Google Cloud).

P.S: AWS Lightsail is now available in couple of different regions across Europe. Rollout which was almost smoothless.

Fundamental problem of every migration … is migration

When you have a WordPress site that’s not self hosted. You want everything to work, but yet you really don’t want to spend any time managing infrastructure it’s on.

And as soon as I started looking what could fit this criteria, I found that there were pre-configured, running out of box WordPress EC2 images available on AWS Marketplace, great!

But when I took a look, although everything was running out of box, I wasn’t happy with software stack it was all built on. Namely Ubuntu 14.04 and Apache, and all of the services were started using custom scripts. Yuck.

Phase 2: What if I built everything myself?

Installing and configuring everything manually, and then writing huge HowTo which I would follow when I needed to re-create whole stack was not an option. Same case with was scripting whole process, as overhead of changes that had to be tracked was too way too big.

Being a huge Ansible fan, automating this step was a natural next step.

I even found an awesome Ansible role which seemed like it’s going to do everything I need. Except, I realized I needed to update all software that’s deployed with it, and customize it since configuration it was deployed on wasn’t as generic.

Idea to have everything Dockerized was around from very start. However, it never made a lot of sense until I put Ansible into same picture. And it was at this point where my final idea and requirements become crystal clear.

Use Ansible to configure and setup host ready for Docker ecosystem. Ecosystem consisting of multiple separate containers for each required service (WordPress + Nginx + MariaDB). Link them all together as a single service using Docker Compose.

Idea was backed by thought to spend minimum to no time (and effort) on manual configuration of anything on the server. Level of attachment to this server was so low that I didn’t even want to SSH to it.

If there was something wrong, I could just nuke the whole thing and deploy code on a new healthy rolled out server with everything working out of box.

After it was clear what needed to be done, I got to work.

After a lot of work, end result is project which allows you to automagically deploy & run containerized WordPress instance which consists of 3 separate containers running:

Once run, containerized-wordpress playbook will guide you through interactive setup of all 3 containers, after which it will run all  Ansible roles created for this project. End result is that host you have never even SSH-ed to will be fully configured and running containerized WordPress instace out of box.

Most importantly, this whole process will be completed in <= 5 minutes and doesn’t require any Docker or Ansible knowledge! 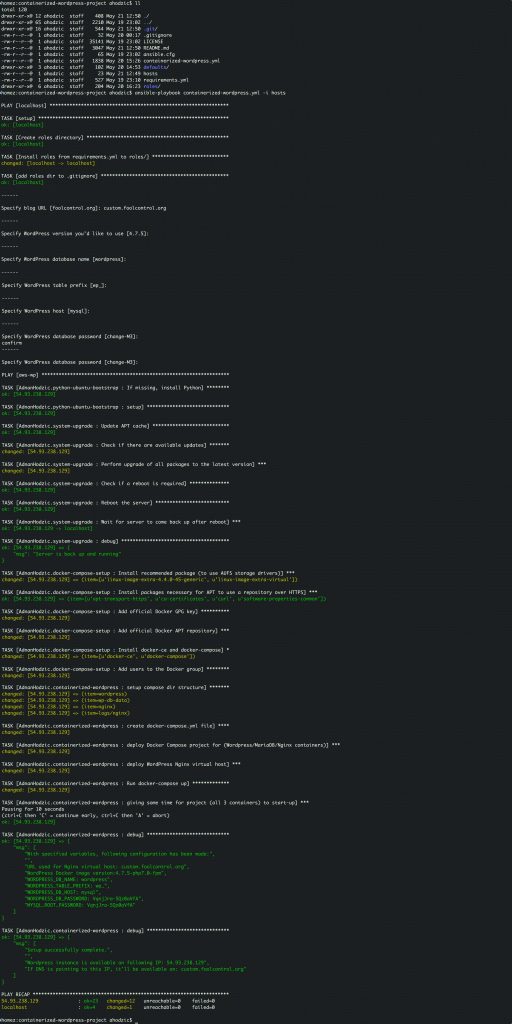 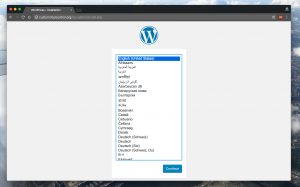 Did I end up migrating to AWS in the end?

You bet. Thanks to efforts made in containerized-wordpress-project, I’m happy to report my whole WordPress migration to AWS was completed in matter of minutes and that this blog is now running on Docker and on AWS!

I hope this same project will help you take a leap in your migration.