Today it’s not easy to anonymize internet traffic and protect our online privacy. From advertisers to various other parties, everyone seems to be interested in what we’re doing online, and it’s our traffic that allows them to track our behaviour and interests.

To make our internet traffic anonymous we could turn to various VPN/Proxy solutions, but in the end need you still need to have ultimately trust that your traffic on other side of the tunnel won’t end up in wrong hands.

That’s why if I want anonymity I’ll always turn to Tor (anonymity network).

RPI3 or any other device you want to run this on needs to be connected to internet via ethernet port, while WiFi interface will be turned into an AP/Hotspot.

While this tool was made and tested on Raspbian (jessie) on RPI3. It’ll work on any other Debian Linux based device. So, if you don’t have RPI3 laying around, but have an old computer which you’d like to turn into Tor Hotspot be my guest. If you run into problems, please create an issue.

Since this tool is still under development, it’s recommended you run it on freshly installed Raspbian (>= Jessie) and not on your prod environments.

Simply get the latest source from Github, and run anon-hotspot 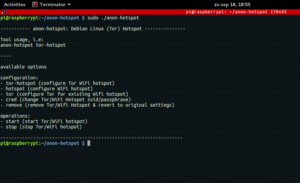 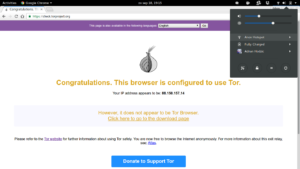