DebConf10 ended 2 weeks ago, I’m back in Bosnia and I needed some time to “recalculate” everything that happened to me in last month :-)

This was my third time in NYC, and NYC as a city never left me empty handed, in every possible sense! And am seriously considering option of moving back one day, whether to get my Masters/phD or just do work we’ll see what future holds for me :cute:

I was in organization team for DebConf10, but if you put me aside, what’s particularly interesting is that there was a total number of 7 Bosnians on DebConf10, two of which were government officials. I must note this wasn’t our complete team, and what’s most important of all is that they all pretty much volunteered as much as they could, of course, besides good will to help Debian, but also to at least somehow prepare themselves for organization of DebConf11.

It’s also worth noting that this was their first DebConf, and I as a leader of the team must say I’m proud on how well they performed. I’m sure by being highly active in volunteering they have learned as much as they could when it comes to “how it’s done” and were able to see good and bad sides of DebConf10 organization team.

Of course, I’d also like to thank DebConf10 team for their superb work, perfect Venue selection, their hospitality and being incredibly friendly and helpful to all of us. As I said in one of my lectures, it’s kinda unwritten rule that every next DebConf has to top the previous one, and that being said it’s going to be almost impossible to compete with this year bid, but being Bosnians we’re up for the challenge ;-)

DebConf10 was busy period for all of us, but I don’t want to start complaining since even though we’ve done enormous amounts of work so far, the real challenge lays ahead of us. With DebConf10 behind us, the thing we should process now is … it’s our turn now, we’re next :D

Before anything, I’d like to thank Government of Republika Srpska for their full financial support, which was one of the preconditions to even get this bid. With their full support + sponsors, we’ll be able to get great amount for sponsorships, for you to come to Banja Luka from the most remote places, and also in case you need visa for them to help you in getting one. Government support is just too precious in any way you want to take it.

We would also like to invite you to DebConf11 in Bosnia (Banja Luka) next summer, we also invite all of you to our communication channels (mailing list, irc) since we would really like to get involved as many people as we can. Besides all of you enjoying DebConf11 next year, we would like you to help us in giving directions since we’re a young team :nerd:

Besides Debian people, I’d like to invite anyone who think he/she could help, or want to get involved, especially individuals/organizations/LUG from whole region!

It’s also important to stress that in all of our communication means, we do speak English, so please do not hesitate if you have any sort of question/suggestion/whatever.

For those interested in next DebConf11, most important page you should follow is our wiki page, where you can find all information and which we keep updated in timely manner: http://wiki.debconf.org/wiki/DebConf11/BanjaLuka

Languages we officially support are: English, Bosnian, Serbian and Croatian 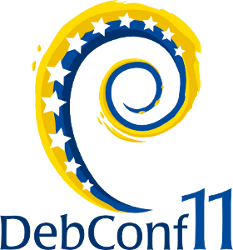 See you next year! :party: