Yesterday was a glorious day for DebConf11 bid in Bosnia and Herzegovina. I had a scheduled meeting with Banja Luka’s mayor Dragoljub Davidovic.

We met in his cabinet, where I presented him with the paper “DebConf11 in Bosnia and Herzegovina” in which I tried to explain what it all means. From what Debian is, over what DebConf is, to why is DebConf important.

The thing I was most worried about was how am I going to explain all this in simple “non-tech” words :)

Either way, I was in middle of explaining what Debian is when mayor interrupted me “I understand, I’m electrical engineer myself” … you have no idea what relief came from these words! :D

Explaining what DebConf is and what kind of profiles attend one such event went smoothly as well, where mayor made some replicas on my story from the projects he worked on and so on. After my last “case” he also explained me how it’s good that we meet, since Banja Luka was known as “electronic” city in ex-Yugoslavia. 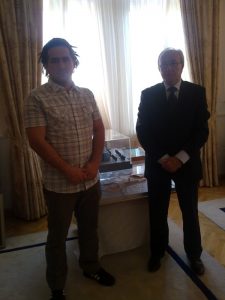 And this is where things start going just ballistic! He says something along the line this is a great idea and that we have his full support, I think you should talk to the prime minister (Milorad Dodik) about this as well! :o

I find my way to the government building, wait for brief period of time and I get called inside of the prime ministers cabinet. I tell him somewhat different story, in terms of more details, how we are competing with München for this bid, and how I’m actually planning if we win the bid, and if the bid is successful we’d most likely change the whole city’s infrastructure to Debian.

He picks up the phone and calls for someone, person comes in and I’m introduced to IT Center General Manager (Krsto Grujic). He tells me that they have few RedHat servers while he leads the way to his office where I’m introduced to director of Agency for IT (Srdjan Rajcevic) where we even have this informal talk where Srdjan tells me he used GNU/Linux user himself and that he still manages two OpenBSD servers.

We talk about various topics, in the end I tell them what we need for the conference, they write it all down and we exchange contact details, since I was called back up by the prime minister.

Prime minister, asks me what I need from him to realize this “project” and I tell him that I’d need everything I gave “IT guys” below, and binding papers that we’d have full government and city support by the end of the month, and that I’ll consult with people from Debian in case we need anything else. “No problem” were his words :D 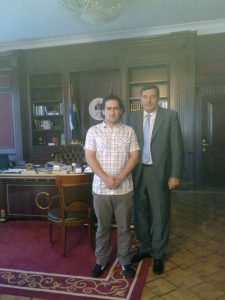 Prime minister and I

I walk out, really asking myself, what just happened, was that a Disney movie or what? 8-)

I’d really like to use this opportunity to invite all Debian members to come and help us realize this bid. Help us put Bosnia and Herzegovina on map of the open source world!