This is going to be a rather long post, so I suggest you go get yourself a cup of coffee/beer/cigarette’s or whatever your fix is.

Last year, since I got this new notebook, I pretty much became a real distro slut. It was pretty much all because of the bleeding edge hardware you had and bleeding edge software that was around, Fedora … Mandriva. Don’t get me wrong, Slackware (any distro) can do those things too, but it’s just … to much pain in the ass.

Long story short, I always returned home, to Slackware that is. Now I think that may not be the case, since I’m already on Debian for a month now, and it’s not annoying me at all. My previous Debian experiences were mostly server based, whole philosophy was something close to reading Nietzsche, but once you got it figured … you like it, a lot :)

Of course, this was all caused by “domino effect” that was generated for almost a year, then plus DebConf experience … plus Slackware and Debian development differences … and lot more.

END_OF_DOCUMENT_TOKEN_TO_BE_REPLACED

I haven’t posted anything in 20 days (only, I really though ages passed …)

I was kind of in a … havoc; So in those 20 days, right I just realized that I just might have interesting life … I mean, well first after years of Slackware, I think I definitely switched to Debian. That has been put into drafts, I’m writing about it, also I switched from glasses to lenses, that is also one nice draft over there, (see the pattern? Debian, lenses … getting bling bling. Yes, I am growing a vagina)

Oh yes, almost forgot, Adnan Hodzic, almost killed his alter ego AbsintheSyringe, that bastard. That was an interesting trip, I guess I could write about that too, for most part, when was the last time you tried moving your inbox from few mb to maybe few gb’s? Graphical tools, such as Thunderbird (IceDove), Kmail, definitely fail in backing up those.

END_OF_DOCUMENT_TOKEN_TO_BE_REPLACED

I still see these questions being asked, so let’s solve it once for all.

Remove ieee80211. If not, just remove while installing/upgrading new ieee80211

END_OF_DOCUMENT_TOKEN_TO_BE_REPLACED 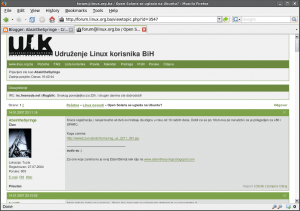 END_OF_DOCUMENT_TOKEN_TO_BE_REPLACED

I won’t talk too much, few days ago I just bumped into this pretty major bug. Submitted the bug to both Volkerding and xorg team. Here’s what’s up.