This topic has been “looping” inside of my head since April, 2008. During DORCS/CLUC on one of the breaks between the lectures, few of us engaged into a pretty elaborative discussion regarding Social Engineering and the Internet itself.

Main points of the whole discussion was … do the kids, the users of those same “social engineering” sites actually realize that all their data remains stored on someones server, even after they have removed their account couple of years later, once they have figured what an ass they were; probably still are, just in different form.

How or has internet changed?

In beginning of mine “internet career” (late 90s) there was this merely dark but comforting place. To best describe it I’d like to use some of the words other then my own:

“Back in the old, dark days of the internet when men were men, women were men and children were FBI agents, no one cared what people thought of them.”

“RBX” on “Does Anyone Know A Website for Cool Bebo Profile Names?“

Also the words from the article I once read are still carved inside of my head … “Kids say e-mail is, like, soooo dead”

“I only use e-mail for my business and to get sponsors,” Martina Butler, the host of the teen podcast Emo Girl Talk, said during a panel discussion here at the Mashup 2007 conference, which is focused on the technology generation. With friends, Bulter said she only sends notes via a social network.

“Sometimes I say I e-mailed you, but I mean I Myspace’d or Facebook’ed you,” she said.

My answer to this same very question is wtf o_O?

Some of you will say, what do you even bother with these things or what kids do/thing. I don’t, it’s just all around me, these “news flashes” are suffocating me literally. In the end, future is left for those same kids to handle and IMO todays kids are just bunch of retards and rejects.

That nice place now even called “old skool internet” was a great place, we still meet today (LUG) and we don’t even know each others names, we all know each other by our IRC handles and Forum nicknames. May sound cold to some of you, but hey, we know each other by who did what, by our deeds, not how much beer and how many chicks we sleep with over the next weekend.

No one knew anybody really, and we were fine with that, we were on them internet, to learn something new, expand your knowledge, possibly earn money, and do your business faster and easier. Then just like mashrooms pop out after the rain, they appeared.

Site whose “weight” is measured in mb’s (and no, there’s nothing wrong with that), it’s full of images, videos, flash and javascript animations, it’s all gliterelly and sparkly, hell it casts a perfect reflection of “real life” Las Vegas.

This is where new ideas were born followed by endless hope of turning it all into profits, of any kind really. Human beings are social beings, let’s give them social stuff, let them have fun on them internet as well, let us bring the “tube” on the internet. Make them loose their time on our interesting and fun sites, while we feed them with advertisments and our products.

Again this is all fine, and I’m not saying there’s anything wrong with having some fun, but what has world turned into?

This is really how Google become what it is today and how they keeping “owning” Microsoft, long time ago they figured everything has turned into Internet, to be honest, what can you even do without the net (internet/intranet) on your computer.

Now my question is, after such statements made above ^, is FaceBook, MySpace and the gang the next Microsoft, the next Google? They got all your data, all your likes and opinions and images and stories … your whole life on their servers. Five to eight years later, that same Emo girl will finish her school, get her degree, and what is she left with? What has she grown up with?

If this is what the internet is going to become, it’s not a fun place. We the creators of the same have to keep up and stay flexible, otherwise you’re becoming obsolete and decapricated.

Two months I got to work on this project, where my initial task was to create pretty much the same controls that are being used on Facebook. I was asked a question if I was a member/user of that same Facebook, or any “social/networking” site for that matter.

I wasn’t and I’m not, only social/networking site I’m part of is Last.fm, and I’m not being too much social on it, I use it primarly for my own purposes, to basically track what I’m listening to. Just to keep track of what was inside of my head at giving time, of course for further analysis of myself as a being.

So I registered myself to this same Facebook, to see what’s it all about, not to exploit or anything, but to do my work and be done with it. In no time I had hundreds of friends, a lot of them which I “lost” long time ago and I got connected again.

Eventually I got pulled into the whole thing and I became just one of the average users, soon enough IT Crowd Season 3, episode 4 was released, and I asked myself, what have I become? This is withal the first time I thought of removing my Facebook account.

Then I changed the tactics, I removed dozens and dozens of my “friends”, I even started have fun and making parody out all of it, by imitating everything I saw on my “friends” profiles. 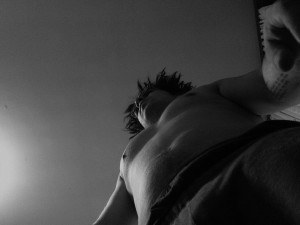 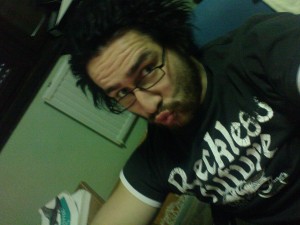 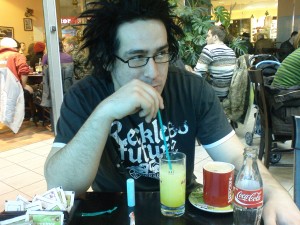 The pictures you see above, were mine reply on their “guido” type profile pictures. 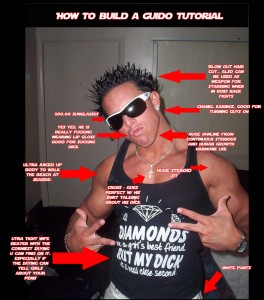 This “plan” (of course) failed miserably.

Now some of you may ask a question, why even try being friends with such people?

First, I wasn’t friends with people (such as the actual guido above) but there were some that kept doing stupid things like that. I was friends with a lot of highly influential and “regular” people, but with “regular” must come “iregular” as well.

Human behaviour  and its social behaviour in global is one, well incredibly interesting behavior. A whole bunch of these people, have their account only because they’ve got something to brag about. Making themselves popular, accepting everyones friend requests, and that’s all fine, but really what for?

Because at some time in their lives they really thought they were ought to be somebody or something special, but as life passes before their eyes, they eventually start to realize it’s not happening gonna happen. That for the rest of their lives they’ll remain just the same as every single of us, haven’t accomplished anything and they are just “ordinary”.

You could, just as I had, let them give themselves ego boosts and trips, but that’s how you’re gonna get into a whole bunch of peole like that, how you’re going to pretty much label yourself along with them, maybe even start acting (subconcisouly) just as they are. In case you do remove someone like this, or for that matter a completely normal person, which was friend with you (or you with them) for who knows what, you got yourself in trouble.

For a reason if that person was with you cuz of envy, this envy turns into hate. I really believe hate and envy are one of two connected emotions. Some people you just want to remove because, well you don’t feel like their friend anymore, but once you remove them, again you’ve started a domino effect. Some people you just want to remove because your business partner doesn’t get along with them (or had accident with the same in the past), so without losing your “friend” even though he/she is annoying you, you’ll just agree to have your business partner lost from your friends list.

In the meantime, let me ask you just how much time are you going to lose on this same Facebook? And one more thing don’t you even try to say, MySpace is different then Facebook, or Hi5 for that matter, or Orkut or anything really. If you ask me it’s all … Mr. Hanky :) ,some is in form of solid, some in is gassy, some is wet some is even diarrhea, but it all goes back to the same, what it really is. Only difference between all of those may be the technology behind it, that is; what excreting it all out.

So instead of doing something productive, even if you don’t even spend 15minutes on that same Facebook per week, you’re losing precious time. And now the final, IMO relative reason to keep your Facebook account.

Keeping in touch with friends from abroad or remote locations.

Ok, but let me ask you a question, in past even couple of months, how many times have you heard it with that same person? And how much time in that same time period you actually spent on your guido type friends?

If anything, I met a lot of friends from all over the world, have family abroad as well, but one thing must be clear. You can have a lover, a friend or anything really, but once you’re on two completely different places, without getting phisical, you really can’t keep that/those friendshit/love/whatever online.

Main reason is that even if it’s family, which can (in most cases) be your only and best friend, different families have different members different problems and different living and working habits. Now there are friends with who I really want to remain friends with, but do I really need Facebook to keep us connected?

If you haven’t found a way to keep you connected before you found Facebook, you better forget about that same “relationship”.

Last night I removed my Facebook account, I even did a Are you anti-social? quiz, and I knew my results before I even got them, but neverthless now I get them on the “paper” as well :)

Nah, you’re not anti-social, you love making friends and you’re 100% NOT shy, which is a very good thing! Stay confident and happy! Just try not to say the wrong thing at the wrong time… that tends to happen to blabber mouths, lol, XP

In the meantime all you can get is being exploited and exposed and have people talking Mr.Hanky behind your back :)