As I couldn’t retain my curiosity for Ubuntu’s “Raring Ringtail” release, I ended up having a dual boot with Ubuntu 13.04 and Debian Sid.

Even thought at the moment 13.04 is only 24% complete, it’s already a pretty promising release. However, one thing that heavily annoyed me is that global menu and HUD (still) don’t work out of box with Eclipse IDE.

Being part of Debian Java team (working on Eclipse) I had to do something about it. To make it as simple as possible for you, I made a package which enables mentioned features. 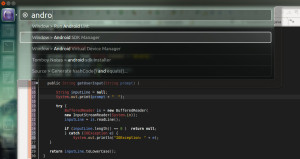 With the release of Ubuntu 14.04, this problem has been fixed and this package isn’t necessary anymore. Thus the reason, why it’s not available for Ubuntu >= 14.04.